The Kakatsitsi Master Drummers from Ghana are one of Africa’s leading traditional drumming groups. Over 12 UK tours, including appearances at WOMAD, Glastonbury and numerous folk festivals, they have wowed audiences with their combination of funky, accessible dance grooves and five part harmony singing, the quality of which sets them aside from most other drumming groups. They have recently added two female dancers to their line-up who perform some of Ghana’s most popular traditional dances as well as leading the audience in some follow-the-leader collective traditional dancing.

Kakatsitsi originate from the Ga tribe of Southern Ghana – a people who before colonization were ruled by their traditional priests, the Wolomei. Their performance includes a traditional ‘Libation’ ceremony in which the drummers summon the spirits of their ancestors to sanctify and bless the gathering. They also play the powerful, 5ft high ceremonial Fonton From drums which play patterns of drum language in call and response with the Atumpani talking drums which were used in pre-modern times to communicate between villages. While some rhythms and chants are more traditional, others are newly composed and designed to appeal to the western ear and to get a western dance floor moving. 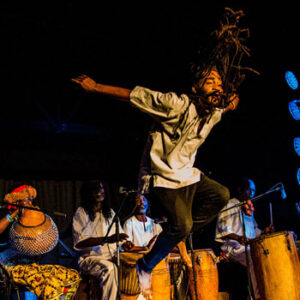 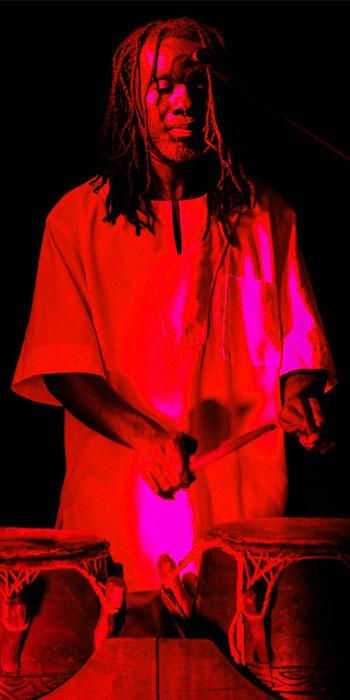 Kakatsitsi first visited the UK from June-December 1996, visiting a number of festivals with the EcoTrip DIY Cultural Caravan, a travelling edutainment roadshow with strong links to the environmental movement. Their appearance at Return to the Source, the pioneering trance club, introduced them to club culture and paved the way for a session in the studio with Medicine Drum, the trance-percussion fusion outfit. Later in the year, members of Kakatsitsi also played percussion on “Journey Between’ by Baka Beyond, a popular Afro-Celtic fusion group.

In 1997 and 1998 Kakatsitsi’s efforts to return to the UK to build on the success of 1996 were frustrated by the obstruction of immigration officials at the British High Commission in Accra who, concerned at the shoe-string nature of the 1996 tour, refused to grant the musicians permission to enter the country. While this cost the group’s management company dearly, the opportunity was taken to revamp the membership of the group and to record the group’s debut album – Etxo Mia Dogo (We will see you tomorrow). Recorded live in a garden in the Accra suburb of Osu, the recording features the occasional sound of the resident chickens as well as occasional sardonic references to the High Commission staff who were causing the group so many problems.

The 2001 UK tour provided further recognition of the power of Kakatsitsi’s music and presence. After leading a small procession in Oxford in support of the Drop the Debt Campaign, Kakatsitsi attended the G8 summit in Genoa in July, performing in a church service and entertaining the protestors. One of the only representatives of the developing world, they went some way at least in fostering a carnival atmosphere of peaceful protest. During October, Black History Month, they visited 23 schools in the London Borough of Hammersmith and Fulham, culminating in an event at the Town Hall in which many of the schools presented a performance of the rhythms, dances and chants learned with the drummers during the week.

In 2002, Kakatsitsi once again toured the UK with Red Centre Dreaming, an Aboriginal performance company, on the Ancestral Voices tour. Funded by the Arts Council of England, the tour developed a unique fusion set between the tribal dance cultures of Ghana and Australia, performing at festivals and arts centres from Inverness in Scotland to Bodmin in Cornwall. With support from a grant from North-West arts, Kakatsitsi and Red Centre Dreaming were also able to develop a second ground-breaking fusion project combining the organic, human sounds of traditional drumming and chanting with the pulsating energy of Western dance music.

Building on their track record of success, particularly in the educational realm, Kakatsitsi’s 2003 UK tour saw them complete acclaimed projects with a wide variety of local authority partners. The highlight of the year, however, was a 7 week tour of Scotland, culminating in a week in Dundee developing a fusion set with some local traditional musicians, paving the way for future collaborations.

During 2004, Kakatsitsi have taken time off from touring to focus on developing new work and spent 3 months in Ghana, where they were developing a fusion project with western dance music producer Greg Hunter, supported by a development grant from the Arts Council of England.

KakatsisBio5
In 2005, Kakatsitsi returned for another UK wide tour, the highlight of which was performing an opening ceremony at the Make Poverty History festival in Edinburgh before leading the march around the city.

An impromptu performance for Gordon Brown at a Christian Aid rally led to them collaborating with Bob Geldof to lead a reverential moment on the morning of the G8 summit.

With the visit to the UK by the !Gubi Family, a group of San musicians and dancers from the Namibian Kalahari, Kakatsitsi participated in a unique concert that saw the joining forces with the San onstage to combine the two African traditions.

2009 also saw Kakatsitsi return to full time touring with a 6 week tour of Scotland. Beginning with a fusion set at the Edinburgh Mela, the tour saw Kakatsitsi visit remote communities such as Westray, Hoy, Eigg and Lochinver.

With the combination of three of the leading group members from Ghana with two of the London based members, the quality of the performances was recognised by the PAN network of the venues around the highlands and islands as one of the top 5 leading acts of that year.

Kakatsitsi returned to the UK for another tour in 2012, which saw them perform at a number of UK festivals such as Sunrise, Broadstairs Folk Week and Shambala before heading up to Scotland to perform at the African Drum Village, Belladrum Festival and at the Findhorn Eco-Spiritual community, before embarking on a 3 week performance and educational tour, taking in the Edinburgh Mela, Orkney International Science Festival, the Aros Centre on Skye as well as school visits in Inverness, Helmsdale, Thurso, Durness, Ullapool, Skye, Arisaig, Fort William and Kinlochleven.

In 2013, Kakatsitsi made further progress towards establishing themselves as one of the leading traditional drumming groups in Africa. The highlight of the tour was an appearance on the West Holts Stage at Glastonbury Festival with electronic dance music pioneers The Orb, in front of more than 8,000 people.

In addition to spending 3 weeks in the West Country teaching and performing, the group also spent 2.5 months in Scotland recording, performing and teaching, including memorable visits to Shetland, Skye and the Outer Hebrides.

2014 saw Kakatsitsi spent much of a 6 month tour in Scotland, where they participated in the cultural celebrations surrounding the Commonwealth Games, delivering educational workshops in schools across the country, delivering street drumming performances for the Queens Baton Relay and performing their new ‘in-house’ dance fusion set with former Ministry of Sound DJ Rebecca Vasmant. The set was debuted at the Knockengorroch ‘World Ceilidh’ as well as being performed at the Audio Soup Festival, the Edinburgh Mela and the Kelburn Festival.

The 2015 Kakatsitsi UK Tour saw them make along awaited appearance at the WOMAD festival, a visit to Dublin to perform at the Big Bang Festival of Rhythm, the African Drum Village in Perthshire, the Golowan Festival in Penzance, Tribal Earth in East Sussex, the Lancaster Music Festival, performances on the Scottish islands of Eigg, Muck and Skye, as well as schools tours of Aberdeenshire, East Lothian, Borders, the Highlands, Cornwall, Hampshire, Surrey, East Sussex and Kent.

2017 saw Kakatsitsi on tour across the UK, this time in fusion and collaboration with the !Gubi Family of San ‘Bushmen’ from the Kalahari desert in Namibia, with whom they performed an ‘inter-tribal fusion set’ at festivals such as WOMAD (where the two groups performed on the main stage), Shambala (main stage), Tropical Pressure (main stage), Tribe of Doris, Glasgow Mela, Eden Festival, Knockengorroch Festival and many more.

In 2019, Kakatsitsi made a return visit to the UK to conduct a 6 month long tour in collaboration with Mbilou, a Bwiti Nganga (ceremony leader, spiritual healer, musician and dancer) from Gabon. The set, rehearsed in Ghana between November 2018 and March 2019 was significantly mellower than the drummers’ traditional set, but brought a very welcome melodic element from the Mungongo Mouthbow and the Ngoma-Ngombi harp which sat easily on top of Kakatsitsi’s funky, accessile dance grooves.