Forest of Fools fuse traditional instruments with funked-up, high tempo beats, charting a course into the depths of the musical unknown. Where no single tune is exactly as it seems, this is Acoustic Dance Music but not as we know it!

In the blink of an eye, you’ll be whisked from the courtyards of Medieval England, to an underground warehouse party. 180 BPM D&B and Jungle Drum sections masterfully interlaced with African Percussion set the tempo for a high-energy supernova of effects-laden trance-folk Melodeon and psychedelic Lead Guitar. Harmonious funk-laced Bass Guitar sits alongside didge-inspired, multi-phonic Sousaphone Brass to create a sub-bass frenzy with serious groove. The resulting composition is as ground-breaking as it is sonically beautiful; a true musical odyssey for the 21st Century.

Head for the dance floor, you’re in for one hell of a ride!

The founder of the band – an unusual accolade for a percussionist – you’ll see that his rhythm-driven format is key to keeping the dance floor bouncing. His collection of instruments is bordering on the obsessive, from djembe and bata to bendir, riq, udo and washboard; there’s not an object in the world this man can’t play a rhythm on!

Formerly with E2K, he’s supported Bob Geldof, played the main stage at Cropredy and toured the UK’s venues and Folk festivals extensively. Gareth’s musical career has been highly decorated, appearing on stage with the likes of Simon Care, Gareth Turner, PJ Wright, The Chipolatas and the godfathers of folk music, The Albion Band. His skill on the melodeon truly is world-class.

The only guy in the known world playing a sousaphone like a didgeridoo. Traditionally a djembe drummer and a didge player, the acquisition of a sousaphone, combined with his love of drum and bass, soon had him lending his didge techniques to a completely new instrument, resulting in a sound that has to be heard to be believed. We bring you the Sousaridoo!

From a family of classically trained musicians, Jon has fully embraced the opportunity to play with forest of fools and indulge his love of jazz and world grooves. Playing trombone, piano, the organ and more, drums were where he found his calling. Attending the London College of Music, he studied under the expert tuition of Eddie Harvey. 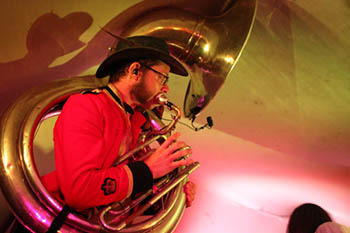 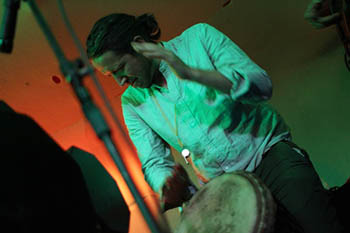 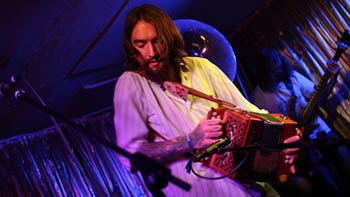 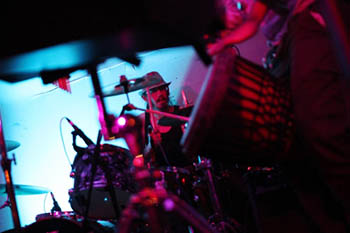 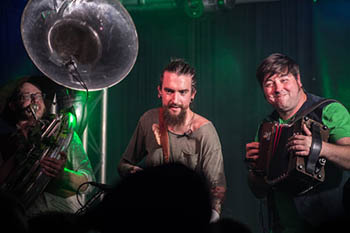